When the first school was opened in October 1853, the school district extended from Lookout Point and St Clair Cliffs to Saddle Hill and Chain Hill.  The settlers built their school of wattle and daube with a thatched roof.  Up to twelve pupils travelled over Ross tussock, mostly on foot and attendance was excellent.  After one year increasing rolls required a larger more pe 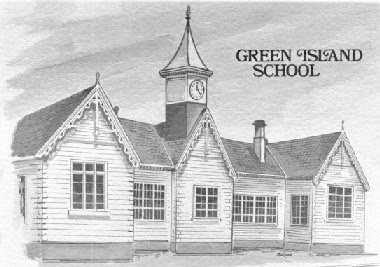 rmanent building and a second room with a shingled roof replaced the original on the same site. The spot is now marked by a cairn and plaque on the lower side of Green Island Bush Road.

As the settlement of Green Island grew and spread north, the school roll reached 48 and, in 1862, a new building on a new site in District Road was opened.  It was made of sandstone blocks cut locally which did not weather well and after just a year it was replaced by a two roomed wooden building. That site, now in the cemetery, is marked by an oak tree.

On 15 October 1883, with a roll of 251 and 6 teachers, a four-roomed wooden school was opened on the present site in Howden Street.  By 1885 the roll had risen to 351 pupils and another classroom was added.  That room was extended in 1911 and is the present school hall.  In 1895 a centennial celebration of the hall was held, and in 1898 a clock and tower was bequeathed to the old school in memory of a former head pupil, Frank Lee Smith who died on 20 August 1898. A line of five new rooms was added in 1956 and these rooms are still in use, though the tower block was replaced in 1978. Temporary classrooms were also used at various times, but the last was removed in 1983.

Well-attended school anniversaries have been held in 1926, 1933, 1953, 1978 and 1993.  The 150th Anniversary was a highlight of 2003 with over 850 people attending events. In 2013 we marked the 160th Anniversary with a school photo for each pupil. The community has been greatly involved with the school throughout its history.  The Parent-Teacher Association, inaugurated in 1944, has undertaken fundraising for advancing technology equipment, teaching aids, and contributed to the culture and sense of community within the school. The PTA is now renamed FOTS-  ‘Friends Of The School’. Parent-based, elected Board of Trustees replaced the school committee-Education Board structure in 1989. Green Island School, with up to 200 pupils and 8 teachers, remains in good heart.